Comfort food. What is our obsession?  I don’t know about you but any meal that is served with mashed tators and gravy is what I live for, especially in the winter.

To me, this is southern, comfort food that us northern folks have admired for so long, they are now a staple in every home. I learned to make Salisbury steak from a southern cook. Of course, like all recipes I come in contact with, I have to alter it to make it more affordable and healthful.

In my family, we have a mix of picky eaters and eaters that will try anything you give them. The obviously easier to feed, being the ones that will eat and try anything, (like their momma). So how did I incorporate more vegetables into the diets of my picky eaters? I disguised them as comfort food. Oh yes, this meal has plenty of meat, mashed tators and gravy; but, that gravy has tons of veggies in it.

In the south, they use a browning ingredient called Kitchen Bouquet. Basically it has vegetables in it. It’s a rich ingredient with loads of flavors. So what I have done? I make my own version of it with fresh vegetables.

I got the idea years ago when I learned to make my own spaghetti sauces. I use the same techniques to make all my sauces. If I can grind up my veggies so they are unrecognizable, then you get all the benefits of their flavor and nutritional value, without the whining, crying, begging and pleading. I do that for anything that I want to eat with a sauce.  It adds so many health benefits, yes. But the best part, all the flavor it adds is going to blow away even the pickiest eater. In fact, when a rich stock is made, the veggies and the meat bones are where those deep flavors are created. I mimicked those same flavors, without cooking stock.

Here is my recipe:

1 diced pepper (I used frozen ones from my garden and it had a mix of peppers in it, including green peppers)

1 teaspoon each of thyme, tarragon (optional)

2 tablespoons of beef broth (to keep the patties tender)

In a bowl, add the meat, peppers, seasonings and beef broth. Form the mixture into patties and roll them in flour. Brown the patties in the oil on both sides.

My picky eaters are no longer at home so I left my peppers in the large frozen chunks. If you need to, mince them or put them in your food processor and make a paste. 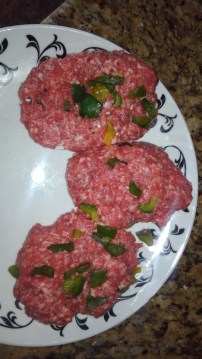 I cooked my patties on my wood burner, in my dutch oven. That is not necessary. That is just how I cook in the winter. I like to use the heat that is already there, versus heating my oven. If you are using your oven, you want to preheat your oven to 350 degrees. You also want to use an iron skillet or heavy pan.

After frying the patties, remove from the pan and set aside.

As I stated earlier, I use vegetables to make my gravy.  For it to taste like a true gravy you have to mince, very tiny pieces, of your veggies.

I love my slap chopper. I would seriously invest in one because they are handy as can be.  You can use a food processor, if you don’t have a slap chopper. The food processor will really pulverize your veggies, making a paste out of them. No matter your method, you will get the same results. I leave my onions whole but feel free to disguise those as well.

After your veggies are minced, you want to throw it in the hot pan, with the same oils, that you browned the patties in.

Brown the veggies until they are golden in color. Once it is golden, that is the point where all the sugars have been released and then browned. That creates so much flavor for your gravy. 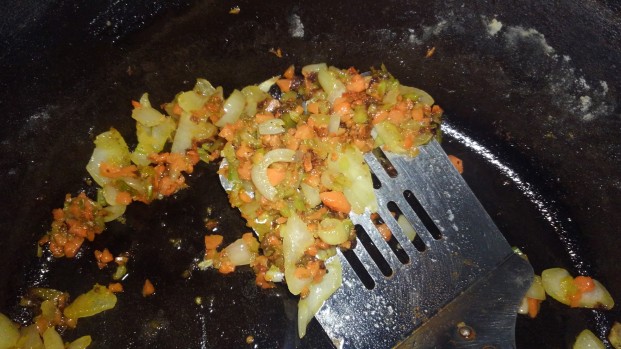 After you have achieved the proper golden yumminess, you want to deglaze the pan with the beef broth. I used water with bouillon. I am a firm believer in using what I have on hand. You could even use onion soup mix, or canned French onion soup. They are all equally delicious. You will need about four cups of whatever you use.

Add the seasoning, the brown gravy and whisk. Then add the patties back to the pan. Cover the pan. Cook the patties in the gravy for at least an hour, for very tender patties.

This video was taken after about 1/2 an hour had passed.

After about an hour you will have this yummy meal. Keep checking the patties and when they are easily cut with a fork, they are done.

My family devoured it and went back for more before bedtime.

View all posts by homemadefrugality